It's hard for travel bloggers to keep up with all of the other great travel blogs out there.  Occasionally a great website will stick in the memory and remain at the top of the Must Remember To Read list.  Other times meeting the author in person will add a little extra sparkle in the the ol' memory banks.  Sometimes both occurrences converge – great site, great person – and you find yourself becoming a genuine fan.

Such was the case with Nellie Huang of WildJunket.  Dario and I had the pleasure of meeting Nellie at the World Travel Market in London last November and we liked her right away.  Friendly and mischievous, but also driven, focused, and dedicated to travel, I found her inspiring and fun.  As with so many travel-based encounters, my only regret was that we could not spend more time together.

But let me get to the real reason for this post: a review of Nellie's new undertaking, WildJunket Magazine.  Nellie and a team of intrepid travel writers, bloggers, and photographers bring you adventure from all over the world. 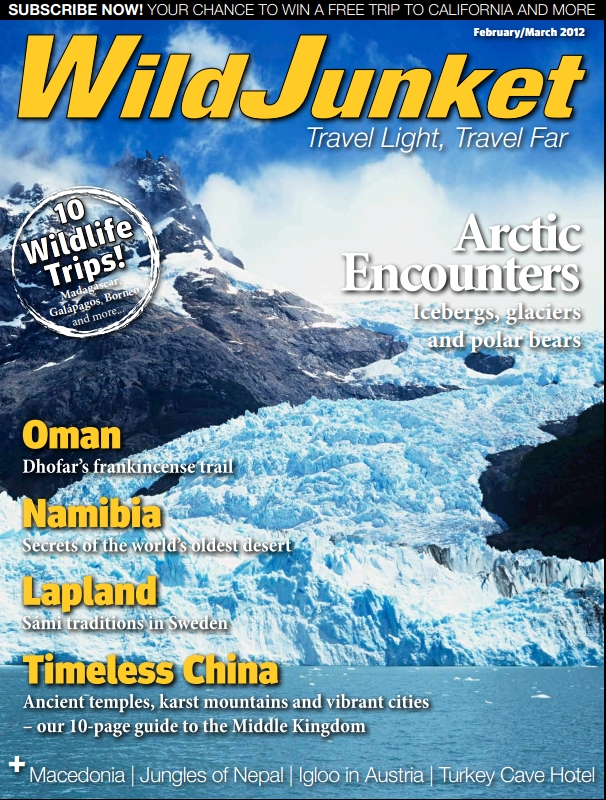 Not bad for a first issue, eh?

It's a bi-monthly (every 2 months) publication and the first issue was for February / March of 2012.  I may be a bit biased, but I will tell you that the layout is gorgeous.  The photos, typography, and graphic design just rope you in and make you read even if you didn't want to!

One of my favorite features of online media over print is that it's so easy to feature full page, full color photos.  Leaving a border around the edge is not even a consideration – fill it up with lusciousness!

Ok, ok…  So I got distracted by the pretty pictures a little.  I have to tell you that the stories and tidbits shared by the travel writers are every bit as engaging.  There are suggestions for travel routes, personal travelogues, 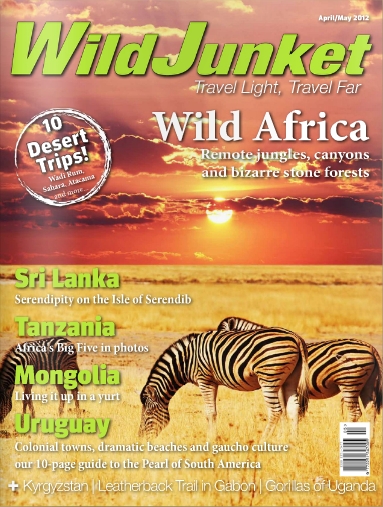 tips on when to travel, and how to get there.  It's simple, easy to digest, and very, very tempting.  Makes you want to buy plane tickets NOW.

As for destinations, they are many and varied: Iceland, Japan, Madagascar, Morocco, deserts, jungles, arctic glaciers – even instructions on how to build your own igloo – all feature in.  And that's just the first issue.  The current issue, for April / May 2012, was just published and has articles on Antarctica, Uganda, Kyrgystan, Mongolia, Sri Lanka…  Everywhere you already wanted to visit, plus a few more to add to your list.

Lest you think I am but gushing endlessly with no rational thought at all, let me put your mind at ease, for there were 2 things that gave me pause.  The first was an article about elephant riding in Nepal.  You see, despite having had this on my list for many years, it recently came to my attention that the vast majority of elephants in Thailand (and probably most of Asia) go through tremendous abuse in order to be "trained" to allow human riders.  Anything that promotes elephant riding tourism now makes me sad.  It is my hope that Nellie and crew will consider matters of animal welfare when deciding what activities to publicize in future issues.

The other thing is only a small concern for me: the format.  I read the magazine on my laptop, so I don't mind .pdf files much.  For users of tablets and other electronic e-readers, however, it's something to consider. 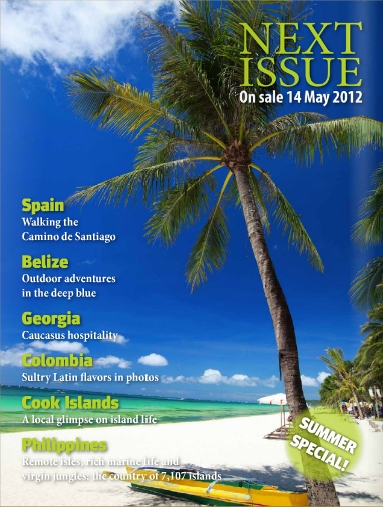 Dario told me, for example, that the Adobe Acrobat (".pdf") format doesn't display well on his Android tablet.  It's do-able, but rather "heavy to use", in his words.

Fortunately, Nellie is pretty tech savvy and made sure that there are both iOS and Android versions available when you subscribe, so this is probably a non-issue for most.  However, I don't know how it all works for users of Kindles and other e-book readers.  But really, even if it is a bit "heavy" in .pdf format, I promise you it's worth it!

If you'd like to see a preview of some of the photos and articles, you can head over to the "current issue" page of Wild Junket.  The last page is a sneak peek of the cover for the Summer Special issue.  Looks like Spain, the Philippines, Georgia (the former Soviet state, not the US state), Colombia, Belize, and the Cook Islands will be featured.  (If you're into vision boards, you'll probably want to print it out and put some of the pictures on your wall for inspiration.)  Gorgeous!

All in all, a fantastic effort on the part of Nellie and the rest of the bunch.  It's lovely, luscious, and inspiring – everything you want a travel publication to be.  At US$2.95 for a single issue, or a year (6 issues) for US$14.95, it's a screamin' deal!