On a recent trip back to Naples, I had occasion to introduce two friends to what I consider the best pizzeria in all of Napoli: Antica Pizza Sorbillo. 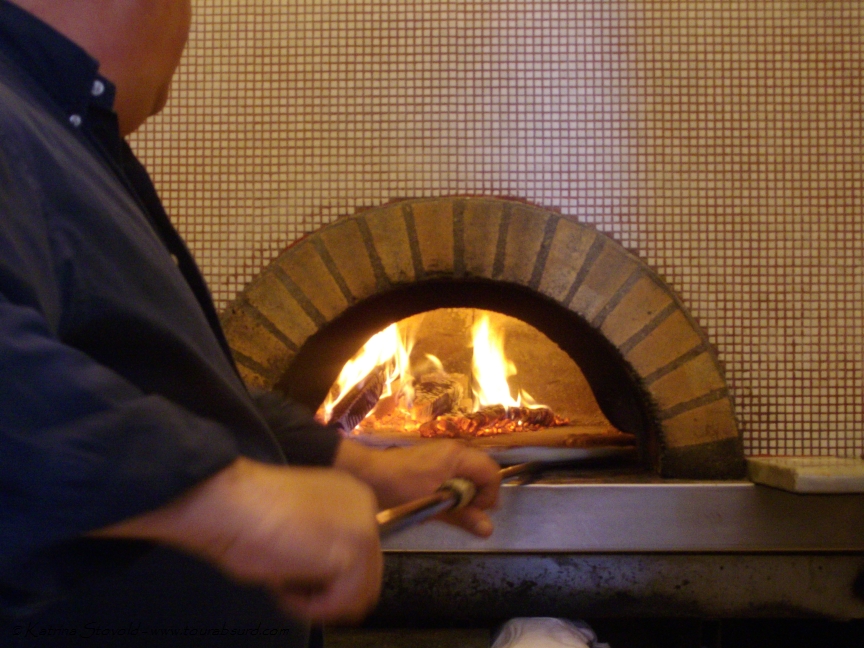 The only way to cook pizza.

There are three similarly named pizzerias within a few blocks of each other along Via dei Tribunali in the historical center of the city.  According to both rumor and the internet, they are all owned by members of the same family.  A walk down the street does not make clear how close the relations are – or if the rivalries are friendly.  A quick bit of online research reveals that a man named Luigi Sorbillo was the patriarch and founder of the clan, fathering 21 children and establishing the first Sorbillo pizzeria around 1934.  It's therefore likely that the current generation of pizzeria owners are all cousins.

One of the restaurants was made famous by a visit from Sofia Loren many years ago.  This place often has a long line because of the association, but Dario dismisses it as being not any better than our favorite and possibly more expensive.  The third, he claims, is not quite as good as the other two.  I have no direct comparison experience with the three, but I have had pizza in several other places throughout the city.  I whole-heartedly agree that Antica Pizzeria Sorbillo – the one with "Antonio e Gigi" on the wall – is the best I've ever tasted.  Anywhere. 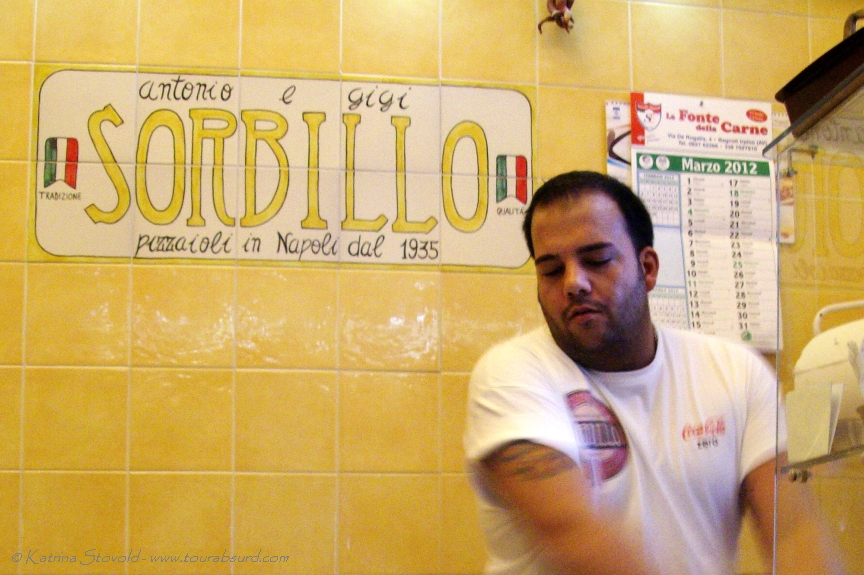 I think of the closed eyes as passionate pizza-making, though it was probably just a blink.

The setting is not fancy.  In fact, it's downright humble with its yellow walls, fluorescent lighting, and wall-mounted television (never know when an important football match might be playing).  But as worldwide street food wisdom goes, if you find locals eating there, you can bet the food is good.

Despite having moved away from the neighborhood over 2 years ago, the staff remembered an Italian companion of mine and greeted him warmly.  I enjoyed the feeling of being back "home" and introducing two friends to Neapolitan pizza for the first time.  They had been avoiding pizza throughout their entire Italian trip up until this point just to savor the goodness.  (I think they slipped up in Rome, but it's all for the good and only served to emphasize the difference.) 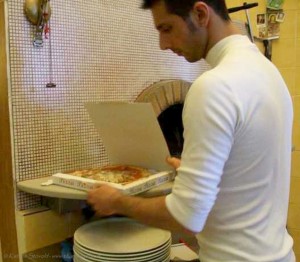 The two things that people ask most about pizza in Naples are: 1) which pizza to order, and 2) how to properly eat it.  The answer to the first question is, always and without a doubt, Pizza Margherita.  I'm afraid I must restrain myself from ranting here, as there seems to be a tremendous misunderstanding elsewhere in the world when it comes to what comprises a Margherita.  Suffice it to say that it is named after a queen and it must have the three colors of the Italian flag.  Red is represented by the tomato sauce, white by the mozzarella, and green by fresh basil leaves (exception can be made in winter when the fresh herb is out of season, in which case dried may be used).  Without the basil, it is simply a glorified cheese pizza.  I will say no more.

The second question – how to eat it – is a little trickier, as it may depend on the situation.  When pizza is taken home, it is often cut into quarters by the pizzeria for easy folding and consumption by hand.  When in a restaurant, it is served whole with a knife and fork provided.  I have heard of tourists suddenly feeling self-conscious after starting to eat their pizza by hand and realizing that most of the other restaurant patrons were using cutlery.  I don't know if they were in a less casual environment when this happened, if the sudden realization that "one of these things is not like the other" worked on its own, or if Italian diners were actually giving them the stink eye.  If the latter (which I doubt, as Italians have a remarkable ability to mind their own business in a city with such a high population density), it's possible that they were simply holding the slice wrong.  That is, a slice thinner than 1/4 of the pizza and possibly held flat, rather than folded vertically. 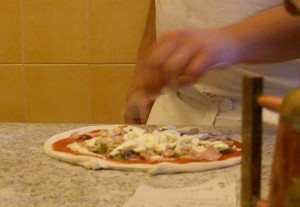 As a caveat, I will say that no matter how much I learn about Italian culture in general, and Neapolitan culture in particular, it becomes more and more obvious that something one family considers gospel may be looked upon as utterly silly by another.  A Neapolitan family I knew were quite practical, and possibly a little outside the mainstream, in this regard.  They always ate pizza with their hands.  The only exception was when it is first delivered from the oven and is too hot to pick up.  Everyone would begin by cutting it into quarters with fork and knife, then having a few bites via utensil.  As soon as it was cool enough, they all picked it up.  As the matriarch of the family was fond of saying, "Food tastes better when eaten by hand!"

Part of what distinguishes Neapolitan pizza from pizza elsewhere in the world is the origin of the ingredients.  It's possible to get the flour at import shops, as we sometimes did in Ireland, but fresh, non-refrigerated tomatoes and mozzarella (cold kills the best part of the flavor in both) – sourced from farms on the rich, volcanic soil of Campania – combine in a way that simply cannot be achieved anywhere else.  At Antica Pizzeria Sorbillo, they take it a step further.  All of the proportions are exactly right, the temperature of the wood oven just so, and the cooking time perfect.  The combination is magic and something that you must taste to believe.

Can't see the video?  Watch it on YouTube: http://youtu.be/ljnHnqfEGjk

When you travel to Naples, you will likely hear lots of people sharing their favorite pizzeria recommendations.  Some may simply use a guide book or their copy of Eat, Pray, Love for advice.  Not too many people outside of the immediate neighborhood will know of Antica Pizzeria Sorbillo.  In fact, if you ask for directions to Sorbillo, you may get pointed toward one of the neighboring restaurants.  Find the one with "Antonio e Gigi" painted just inside the entrance behind the chef.  Eating there will leave you smiling! 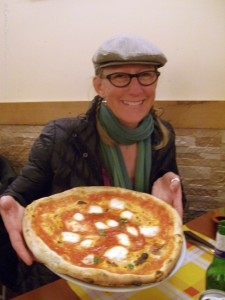 Sherry can tell you allll about it!